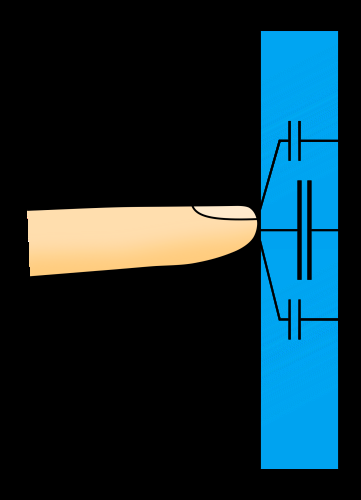 Smart phones devices are all around us these days. These phones feature different types of touch screens. There are also many computers and other everyday machines we encounter which use touch technology; ATM’s, information kiosks, registration counters, and POS cash registers are just some of them. This site has more information about different touch technologies. Though there are more than a dozen different types of touch screens, people often try to compare those that use resistive with those that use capacitive technologies. Each type has its own pros and cons. And in many cases the question should not be ‘which one is better?’, but rather, ‘which one is better for a particular application?’

The two sets of conductive grids are separated by spacers placed at regular intervals. The current which runs across the layers of ITO create measurable levels of electrical resistance. The electrical current running across the screen runs horizontally on one layer and vertically on the other, creating a sort of grid.

When the screen is touched, the outer layer of flexible plastic deforms just enough to allow contact between two layers of conductors at point of contact. This causes minute changes in the resistance at the vertical and horizontal which allows an accurate determination of touch position.

Capacitive screens usually consist of two rigid layers often made of glass. The layers are imprinted with ITO layers also running at right angles with each other and separated by an insulating material. Two conductors separated by insulation is what makes a capacitor, thus in each place where the positions of vertical and horizontal conductors cross, there is a small tiny of measurable capacitance.

As the user’s finger touches the outer screen, the capacitance at the point of touch varies just enough to allow determination of its location.

The Pros And Cons Of Resistive And Capacitive Screens

If you need something which does not easily break for use under normal lighting conditions, you may like resistive screens. For clearer images in bright light and better scratch resistance, choose a capacitive screen.

Stanley Durant
A socialite in his own right, Stan is a well connected writer who finds himself at almost all tech conventions and allows him to cover all his technology passions with first hand commentary and feedback from the innovators.
Access Control System: Limits Opportunities For Mischief
4 Qualities of an Ideal Service Desk Manager